Damaris started her modeling career at the age of 13. She took modeling and etiquette classes at International Models and soon after became the head teacher for 10 years a the age of 14. She is now a sought after Miami model having been invited to model for Mercedes Fashion Week, Funkshion Fashion Show, and Miami Fashion Week. She has been chosen as Campaign Model for Coca Cola, Keragreen, Moda Xpress, Generation Shoes, Zuka Shoes, Jack Rogers Footwear, Rain Cosmetics, National Hotel, Hotheads Hair Extensions and many more. Her biggest campaign yet was for Woodies Sunglasses where she modeled alongside Kendall Jenner in 2013. She has acted in commercials such for Toyota, Colgate White, Daisy Fuentes Secret Extensions, Magic Earrings Collection and Cuban brand Hatuey Beer. She has also been featured in music videos such as  Rascal Flatts "Why Wait" and Zeth "You and Me", and was included in the movie "Step up 4: Revolution"​ 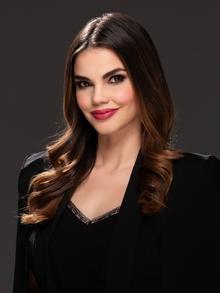 Damaris embraces her role as an ambassador of her community by mentoring non-profit organizations such as Big Brother Big Sister and Strong Women Strong Girls. In 2009, the Mayor of the City of Hialeah, Julio Robaina presented her with an award for her dedication towards being an inspirational leader in the City of Hialeah. In 2012, the State of Nevada Governor Jim Gibbons also presented her with an award for her inspirational and productive work in the community. ​

Damaris graduated with honors from Florida International University, majoring in Marketing and Business Management. With the end-goal of opening her own business, she is the founder and owner of D.A.M.A were she has found her happy balance in owning her own enterprise and impacting the youth, one child at a time.

She has had a very successful career in pageantry, having competed in and won a series of titles which include:  Miss Hialeah USA 2009, Miss Miami USA 2010, making “TOP 15” in 2009 and 2010 at Miss Florida USA pageant. Miss Carnaval Las Vegas became another of her many titles in 2012. In 2011, she won Miss Carnaval Miami making 2nd runner up at Miss Florida USA 2012. In 2012, won Miss Cuba where she had the opportunity to travel all over the world representing her country on an international level. After being the first Miss Cuba to place TOP 15 at Miss Intercontinental 2011 in Spain, Damaris went on to compete at Miss Supranational 2012 winning the Best National Dress and taking home 3rd place in Talent. But she didn't stop there, representing Cuba at Miss Reina Hispanoamericana 2012 in Bolivia, she placed 5th runner up and won Best Interview and Miss Harmony. In 2013, she won Miss Universal Petite, Best Interview and Miss Photogenic as Miss Cuba Petite in Bahamas.